Berlin has become bike friendly within a year

Riding around many districts in Berlin with your bike has become a lot safer and more comfortable during the past months. This is due to the new pop up bike lanes. The pop- up bike lanes are temporary bike lanes that can be constructed quickly.

During the pandemic the bike has been one of the best means of transport to safely get around the city. In Berlin the number of bikers has increased by 3%. Pop-up bike lanes serve as a tool to quickly adapt to the increased bike traffic and give people the incentive to use this eco-friendly and safe way through the city.

Berlin is a city with constantly increasing bike traffic even though it does not yet offer continuous bike infrastructure. The new mobility law aims to change that as all main roads will have their own bike lane. But since these transformations take time the district of Friedrichshain and Kreuzberg started to implemented pop-up lanes along the main roads, where future bike lanes have to be constructed. Many districts followed. By now 10km of pop-up bike lanes are already being enjoyed by Berlins bikers. Many more pop-up bike lanes are in the making. The plan is to have more than 20 kilometres of new bike lanes available so that people can comfortably do their daily trips through the city via bike.

The goal is to replace these temporary pop-up bike lanes bit by bit with the long-term bike lanes bringing Berlin forward in becoming a more and more bike friendly city. By now  11 pop-up bike lanes exist throughout different districts in Berlin. Let us give you a hint of where to find them:

The Danziger Straße is one of the most busy parts of the federal road B96a. the new pop-up bike lane in Friedrichshain and Prenzlauer Berg is closing the gaps between existing bike lanes.

On the Frankfurter Alle one of the main connections through Friedrichshain, bikers had to use a small bike lane on the pedestrian sidewalk. This led to collision between passengers of public transport leaving the U-Bahn entrances. The new pop-up bike lanes are planned with enough spaces for permanent bike traffic along the the road.

The Hallesche Ufer is one of the important east-west connections between Kreuzberg and Tiergarten. A new pop-up bike lane is currently in construction. 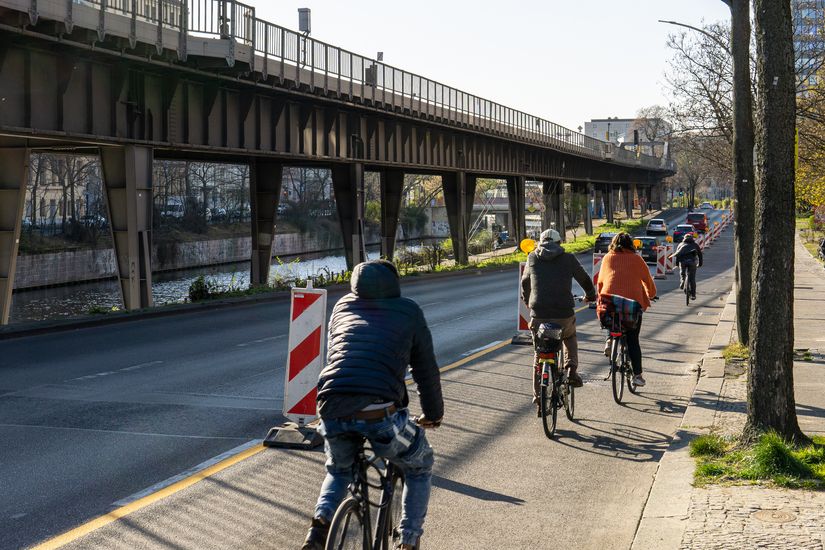 Interested in biking in Berlin – both on the pop-up bike lanes as well as other lanes? Join one of our public bike tours in Berlin: https://greenbiketours.org/vare/the-sustainable-berlin-of-the-future/

Or book a private tour for you and your group: https://greenbiketours.org/the-sustainable-berlin-of-the-future-tour-by-bike/

Amazing bike and walking tours in Copenhagen, Malmö and Berlin focusing on the green and sustainable city.